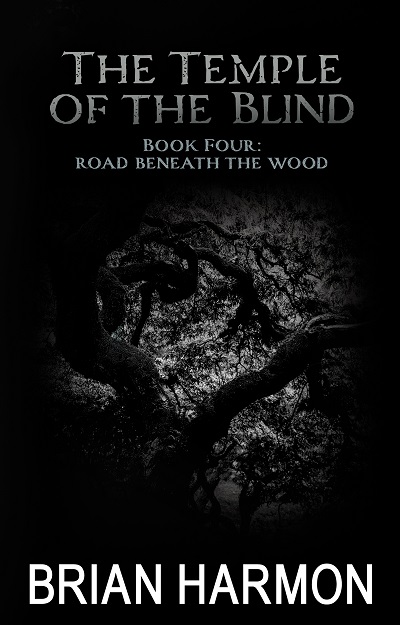 The Temple of the Blind
~ Book IV ~
Road Beneath
the Wood


What horrors prowl the eternal night of the Wood?
Far beneath the streets of Briar Hills lies an enormous temple of stone. Ancient secrets are buried within its walls…along with countless and unspeakable horrors. But among its many corridors lies one passage far more treacherous than any other. In its unbridled terror, it is second only to the nightmare that waits at its end.


And it all began with a wooden box...
“The things in this tunnel are imaginary as long as you don’t prove them otherwise…” This was the warning of the Sentinel Queen.


Separated from the companions he’d grown to trust, Wayne stands alone as he prepares to take his first steps on a journey through a terrifying, personal hell. The dark and ancient tunnel that lies before him will test his courage to its very limits and force him to face the greatest fears he’s ever known…and even the past he sought to flee.


The rules have been explained to him, but can he really ignore these “imaginary” things to save his own life? And even if he’s strong enough to endure this torturous passage, does he have what it takes to survive what lies beyond? The things that lurk in the Wood are not imaginary. It’s a place of immeasurable darkness and despair, a place where death is eternal, but rarely final…


Can he overcome the fearsome road before him, survive the unthinkable horrors that await him in the black forest beyond and finally fulfill the promise he thought he had failed to keep? Or will these dark places swallow him forever?

Book IV
in
The Temple of the Blind
series

Available now on Kindle and in paperback!


Keep scrolling for a preview of this book!

The Temple of the Blind
~ Book IV ~
Road Beneath the Wood


(Warning: Spoilers ahead if you haven't read the first 3 books!)

Wayne didn’t know how long he’d been lying on the cold, dirt floor before consciousness finally returned to him.

He sat up, struggling to orient himself. He was cold and naked and filthy. He felt dizzy, his thoughts sluggish as he struggled to rise from his unnatural sleep. He didn’t know what the “gift” was that the Sentinel Queen gave him, but he was fairly sure that it wasn’t anything he wanted. His body felt weighted, as though he’d performed some great physical feat, and there was a cold dampness upon his body that made him feel even dirtier than the reeking, rotten sludge that was dried upon his skin and clotted in his hair.

He’d been through hell tonight already. First, he was attacked by that thing inside Gilbert House. Then he’d walked for hours, naked, through miles of dark passages within the Temple of the Blind, collecting cuts and bruises along the way and battling his own fears to the brink of exhaustion. He’d even trudged through that disgusting lake of foul-smelling mud, only to end up at the mercy of a freakishly tall woman with no face.

He wasn’t so much seduced by her as raped, and that feeling was like a vile worm wriggling around inside his guts.

Even his dreams had seduced him. He dreamt of Laura Swiff, naked and lusting, her voluptuous body glistening with sweat. He dreamt about Nicole Smart, her amazing breasts bare and pressed against his skin as she gazed up at him with a naughty gleam in her sexy eyes. He dreamt about Olivia Shadey, her sweet face gazing up at him, pleading with him as he reached out to touch her.

He even dreamt about Gail Porbin.

He hadn’t let himself think about Gail in a very long time, but as his dreams began to break apart and he felt himself rising toward consciousness, he found himself remembering her vividly. She was a time in his life that seemed very far away, though the years between now and then weren’t so many.

Gail was a confident girl, a member of the volleyball team, well liked by her friends and well admired by the boys. She was petite, with a gorgeous figure, and the most beautiful smile he’d ever seen. Back then, she was everything he’d ever wanted. She was beautiful, popular, sexy, free-spirited, easy going…but in the end he’d let her go. It’d been much easier to break up with her than to go off to college without her. He’d set himself free of that leash and prepared for a new life with new friends, new women and new opportunities.

At least, these were the things he told himself every night as he lay in bed waiting for peaceful, unthinking sleep.

His flashlight was lying next to him, still on, still intact. He vaguely remembered dropping it when the Sentinel Queen advanced on him. He rubbed at a dull pain in his temple and looked around. The walls of this tunnel, as well as the floor, changed abruptly from smooth stone to coarse dirt and rock about halfway between the first and second seals. He was sitting on the dirt, only a short distance from where the stone ended, close enough to see both seals without picking up the flashlight. He was alone. The Sentinel Queen was gone.

Behind him, the first seal was tightly closed again.

He stood up and walked back to this first seal, leaving the flashlight on the floor for the moment. This side of the stone was also covered with those odd carvings, but there was no circle like there had been on the other side. He ran his hands over the surface. It was hard and cold. He pushed, but it wouldn’t budge. Like it or not, he was locked in. He could only go forward.

He returned to the flashlight and picked it up. Ahead of him, there stood another heavy slab of stone, the second of the fourteen ancient seals he’d been told about. On the left-hand side, amidst the shapes and lines and symbols that were carved into it, was a single circle, about ten inches in diameter.

He tried first to push outside the circle, to move the great stone slab without the trick he’d been shown, but the seal might as well have been a mountain. Several tons of solid stone stood against his bare hands, refusing to budge. But when he put his hand inside the circle, the seal withdrew as though intimidated, rotating on its center with the ease of a well-oiled gate. There was a sound as it moved, the coarse grinding of tons of stone across the floor, the sound one would expect to hear while performing such a feat, but the effort was absent, as though he were not actually moving the stone, but watching someone else do it.

Was it some kind of advanced, hidden mechanics, he wondered, or some form of magic? Either seemed equally possible after the night he’d had.

Beyond the second seal, the tunnel stretched away into the darkness. He couldn’t see the third seal from here, only a dense blackness that hovered ahead of him, almost mocking him.

Always close one seal before opening another, he thought. The Sentinel Queen had told him this, and he quickly found that he could push the seal closed from the other side without the circle. It turned without effort until it was flush with the wall, and then it would budge no more, regardless of where he pushed.

He couldn’t wrap his head around how it worked, but he also didn’t try very hard. He turned and shined his light into the darkness ahead. Having permanently closed this door, he felt a quiet sort of anxiousness building within him. What exactly was he locking himself inside?

But there was no turning back. From the start there was nowhere to go but forward. The Sentinel Queen made sure of that when she left him in the tunnel and locked the first seal between them.

Was that the point of her so-called “gift”? To render him unconscious so she could lock the door behind him without risking him changing his mind and fleeing back the way he came?

Not that he would’ve done that. If there was even the slightest chance that Olivia could still be alive, he needed to do this.

He took a deep breath, held it for a moment as he steeled his nerves, then let it out again in a long, tired sigh. Then he began his long walk into the ominous, looming darkness, a feeling of deep apprehension growing inside his gut. He had no idea what awaited him ahead. He had no idea if there was anything on the other side of this darkness but lonely death. He had no clothes, no supplies, no weapons with which to defend himself. He had nothing at all except blind faith and desperate hope that somehow he could overcome this challenge and fulfill the promise he made to Olivia.

Never linger long in one place. Do not touch the roots of the trees that grow in the Wood. If you see something in the darkness, do not investigate it. If anything should call your name while you are down here, do not answer. You must ignore these things. These were the warnings of the Sentinel Queen, exactly as she had spoken them, and remembering them now, he felt an icy shiver run up his spine. The things in this tunnel are imaginary as long as you don’t prove them otherwise…

He had a terrible feeling that this was going to test his courage far more than the fear room ever could.

Find out what happens next in

The Temple of the Blind
~ Book IV ~
Road Beneath the Wood